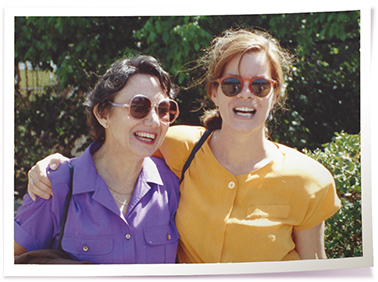 Marcia Gay Harden is one of the most celebrated actors of her generation. In 2001 she won an Academy Award for Best Supporting Actress in a Supporting Role for her portrayal of the painter Lee Krasner in Pollock, and in 2009 she won a Tony Award for Best Actress in a Play for her portrayal of Veronica in Yasmina Reza’s God of Carnage. Her films include Miller’s Crossing, The First Wives Club, Mystic River (for which she received a second Academy Award nomination), Into the Wild, Magic in the Moonlight, and Fifty Shades of Grey. The television shows in which she has appeared include Law & Order: Special Victim’s Unit, The Newsroom, How to Get Away with Murder, and Code Black.

Academy and Tony Award-winning actress Marcia Gay Harden takes on her most important role to date: gatekeeper of memories. The Seasons of My Mother is a beautifully rendered portrait of two lives –Marcia’s own, and that of her mother Beverly, an accomplished practitioner of ikebana, the art of Japanese flower arrangement, who struggles with Alzheimer’s disease.  Each paid attendee will receive a hardcopy of Marcia’s memoir.

Learn more and see her work at: www.marciagayharden.com